Paul has appeared on TV, radio, theatre, and even popped up in the ad breaks. He has been in over 200 TV programmes from one offs to series of series. In sketch comedy he was a regular on BBC’s Bafta award winning The Fast Show, as well as appearing in two seasons of The Russ Abbot Show. His multi character voice has often been heard on Radio 4. And he has been in over 50 commercials broadcast all around Europe. For a full list of productions visit the IMDB page here.

Paul is a freelance media professional. His varied work career spans acting, TV and Radio comedy writing, animation voiceover, journalism for the FT and the Times as well as corporate communications video consultancy work. He is based in Spitalfields in London, UK.

Best known work was working with the regulars on The FAST SHOW.

The Fast Show, known as Brilliant in the US, was a BBC comedy sketch show programme that ran from 1994 to 1997, with a special in 2000. It was one of the most popular sketch shows of the 1990s in the UK. The show's central performers were Paul Whitehouse, Charlie Higson, Simon Day, Mark Williams, John Thomson, Arabella Weir and Caroline Aherne. Other significant cast members included Paul Shearer, Felix Dexter, Rhys Thomas, Jeff Harding, Maria McErlane, Eryl Maynard, Colin McFarlane and Donna Ewin.

It was a pleasure and a privilege to join the Russ Abbot team for two series for the BBC. His comic ability and sense of fun were always a joy to work with. Here are some golden oldie sketches as a reminder. www.russabbot.co.uk/welcome.html

Paul has made guest appearances in sitcoms, alongside, Rick Mayall, Robert Lindsay, Maureen Lipman and others. He has also played parts in many of Britain’s long running soaps, Eastenders, Holby City, Casualty etc.

Paul began his career as a sketch comedy actor with a national stage tour with the Cambridge Footlights appearing alongside Stephen Fry, Emma Thompson, Hugh Laurie, Tony Slattery and Penny Dwyer in The Cellar Tapes. This show won the first ever Perrier comedy award at the Edinburgh Fringe festival in 1981.

The 1981 Cambridge Footlights revue, entitled "The Cellar Tapes", was broadcast on television in 1982.

Another notable theatre run was with Marti Caine in Snow White and the Seven Dwarves. 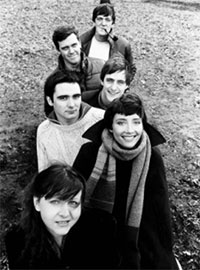 Minor roles in two films, but while filming one of them I got to meet comedy God, Bill Murray.

Paul has appeared in over 50 commercials. Directors of these include Richard Loncraine, Kevin Godley (of Godley and Creme), Paul Weiland and Peter Richardson who directed Paul in a series of commercials for Courts.